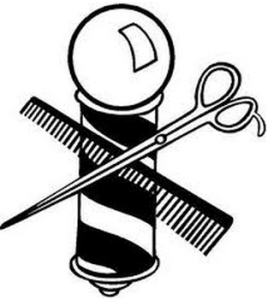 I dropped into Billybob’s Bar-n-Barbershop for a quick beer on a hot day. Walt was in the chair, having his monthly beard trim, and Dwayne was scowling at a glossy magazine while he waited his turn. Neither was talking, so I waved cheerfully and asked what was up.

“Texting,” Walt muttered, “Kids do nothing else, wasting their time and mine too since they expect some response.”

“Walt’s thumbs are too fat and slow,” Dwayne explained with a smile.

“Nothing wrong with my thumbs, stupid keypad’s the problem. What happened to good old qwerty?”

“Qwerty! Ancient rubbish. Get with the times, Walt.”

“Qwerty’s traditional, feels natural to me.”

“Kelemenope. KLMNOP, middle of the alphabet. It means you think because things always go together, that must mean something. Ain’t necessarily true.”

“Qwerty’s scientific. Typewriter was designed to put commonest letters in the middle, less common at the edges. Meaningful, natural”

“Like hell it is. They got it all wrong.”

“You just won’t accept the scientific approach. Maybe qwerty’s not quite right, but it was a good try, sound principle. Beats ABC every time.”

“You and your science, gobbledegook. You see things together, you marry ’em in your mind. Like your global warming propaganda.”

“Whose facts? Your so-called scientists, half of them foreign, paid by UN or socialist states. And it was real cold here last month, let alone back East.”

“I can’t argue with pig-headed obstinacy.”

“That’s why you always lose. I stick by my convictions.”

“You got a record? How many convictions, not counting your misdemeanors?”

“Better an evolved smart-ass than a dumb donkey or a mule.”

“Evolved? You gonna start on that again?”

“Like hell he does. Read your Bible and watch your mouth.”

“Ice is melting, sea’s a-rising. Gonna be floods along the coast.”

“God’s will. He sent a flood once before, He can do it again. Then we’ll see who’s left to laugh last.”

“I’m insured. I got sandbags.”

“Wait till you see this flood. You’re no Noah.”

“Dwayne, you really think this warm-up is natural, not man-made?”

“Sure I do. Happens every forty thousand years. Perfectly normal.”

“So the last time was before Creation?”

“I’ve got you. You can’t believe in a forty thousand year climate cycle and also an act of creation only six thousand years ago. Take your choice, which is it?” Walt smiled at me and held up both his hands. “Ten bucks on this one, if I can collect, Dwayne’s a slow payer.”

Dwayne also grinned at me while he answered Walt. “Fancy word day today, Walt. You ever hear of provenance?”

“Providence? Sure, it’s like good luck. I can feel your money in the palm of my hand.”

“Will too. He made the laws as well as the universe. It flies because He owns aerodynamics too. You can’t argue with the judge.”

“That makes your God real deceptive, manipulative, a trickster.”

“Maybe so, but I’m sure He has his reasons. I believe.”

“Don’t need to, I just believe. And you can’t disprove it.”

I could see Walt’s face reddening behind his beard. I drank the last of my beer in one quick gulp and rose to leave.

I called back over my shoulder. “Sometimes shit just happens. Like kelemenope.”

Writer of Kern. View all posts by khotisarque