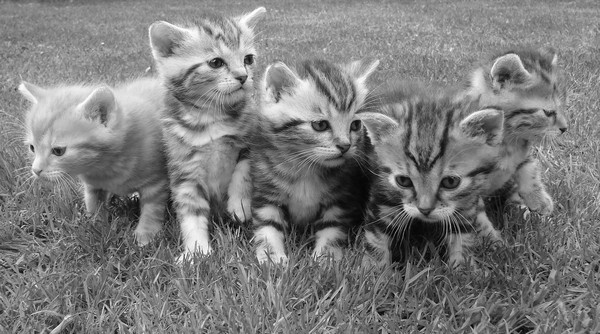 Clowder, Texas ain’t there no more, folks long-gone, a duster in ’32 scattered the sticks. Pat Riley started his last drive there. Pat was a rat-faced little man, skin leathery as twice-baked boots, with amazing grey eyes that hypnotized you, convinced you of the utter truth of whatever he wanted you to believe. He’d used those eyes on every woman in town and on most of their husbands. This time he was using them to convince some English dude that Pat was stupid drunk. Pat loved a good wager, and so did this dude with money to lose. After Pat bragged of his cattle and sheep drives the Englishman sneered a hog drive’d be harder.

“Sure could. Thousand cats, here to Colorado. On the hoof.”

“No need for that, herded there on their own paws would do. Pleasure to take your money,” said the dude confidently.

He put me and Dwayne to work making a portable fence from grapestakes and wire, eight feet high and sixty feet long. It was cumbersome, but it fit onto a wagon and made a corral big enough to hold a thousand close-packed cats. We set it up outside town and spent all Fall recruiting cats. Seventy six of them, I recall. Pat had a boxcar of cheap fish railroaded in. We waited for snow, then set off. Dwayne drove the four-ox wagon with our supplies, the corral, the fish and a log dragging behind kinda like a snow plough, leaving a deep icy groove behind the wagon. Pat and me just rode along behind with a couple of coonhounds on long leashes. We’d kept those cats hungry and they followed a skimpy trail of fish in the groove behind the wagon. Some tried to scatter to either side, but up to their bellies in snow they got smarter real quick and came back to our trail. The coonhounds persuaded them that forward was better than back, and we made pretty good progress. At night the portable corral kept them warm and cozy and breeding like rabbits, by daybreak they’d be hungry again and we’d have a dozen or so new kittens. You never did see such a tame passel o’ pussies; the kittens had never known any other life. We herded them from Texas into New Mexico, keeping to high snow-covered ground, then clear into Colorado. Took us three months, almost used up all that stinkin’ fish, but we arrived with a thousand head. That drive was one for the history books. Trouble was, Pat’d won his bet but couldn’t collect. Dumb English dude had made another crazy bet a week before we arrived, that he could insult Rattler Davis and live. He’d lost that one too.

Also find these older posts…
A … Angst
B … Brag