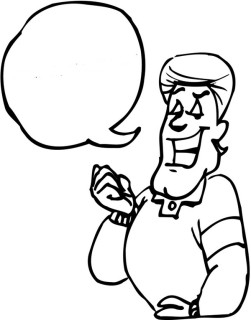 B was to be for ‘Beginning’, but the mere fact of beginning pales into relative insignificance compared to its implicit bragging rights.

Bragging is not one of the proudest achievements of mankind. On the other hand, it is not one of the seven deadly sins. Perhaps a venal weakness, perhaps a minor pecadillo? It is, on the surface, intended to impress others. Occasionally it does that, if the others are blessed with unusual naivete. More often, it is seen through; yet it still fulfills its real purpose of giving self-reassurance to the braggart. He or she who actually does great things either does them in public or in private. If in public, the world takes notice and bragging is redundant. If in private, it is good done by intentional stealth and the doer does not seek publicity. It follows that the braggart has not done great things, except in his own esteem. So he can be ignored, laughed at, perhaps humored for the sake of greater audience participation and enjoyment.

So much for general philosophy. More down to earth, brag was the old name for what became poker, a great game of skill and applied psychology. There, bragging becomes a useful tool, implicit in the nature of the game, a skill to be proud of. There are variants of the game, including one known as liars’ dice; which brings to mind a long-ago event.

It was past midnight and a handful of us were keeping a bar open. Dice appeared from thin air, a cup, a thought and the game was on. In liars’ dice you shake five poker dice, 9s through Aces, and conceal the outcome beneath the cup. You declare the contents, for example ‘a pair of Queens’, and it is understood that the declaration and honest truth are at best distant cousins. The next player can choose to accept the dice along with your veracity, or he can call you a damned liar and lift the cup. If you have accidentally stated the truth, or more likely understated the strength of the throw, he loses; if you exaggerated, you lose. But if he accepts the cup with no challenge, he can peek, select a number of dice to throw, and make his own, higher, declaration for the next player. Challenging is dangerous, for most players most of the time will make understated declarations. Always leave a margin for the next man; a good rule for dice and for life. But finding that margin of grace becomes harder as the declarations inevitably creep upwards.

So the cup is passed to me as ‘Three Queens’ and I accept it. I look, and behold there are actually four Kings and a fifth die. I toss the odd man out, concealing it, and confidently pass the cup as ‘Four Queens’. It goes the rounds, each player in turn tossing a single die trying to make a fifth, and raising the declaration. So when it comes back to me and is now declared as ‘Four Kings and an Ace’ I feel confident that there are at least four, possibly five, Kings showing. I accept it.

Oops! I see no Kings, no pairs, no straights or flushes, just a mish-mash. Those underhanded friends of mine had conspired, each of them discarding a precious King until my set of four had vanished. The game was rigged, it was a seditious and immoral conspiracy. I smiled as confidently as I could, fooling nobody as we all knew my situation. When you gotta go, go with a smile on your face and your head held high. I shook the entire five dice, covered them with the cup without even glancing at them, took a last swig of my beer and declared ‘Five Aces’. Next player had neither choice nor hesitation. “Liar!’ he said, lifting the cup and revealing five Aces.

That is a reputation that is hard to live down or to live up to. Since the story is true as the gospels, I tell it in all humility rather than as a braggart.