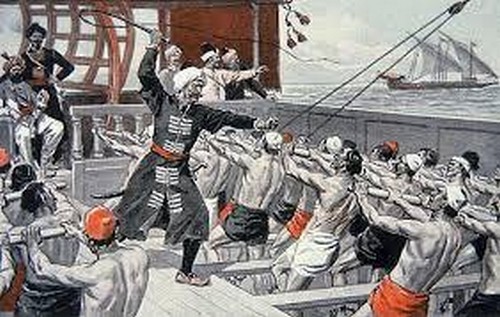 The mighty ship glided serenely over the calm ocean, leaving barely a ripple of a wake. The rowers bent, exhausted, over their oars. Even the shift bosses grew sleepy as the sun dipped into a crimson horizon. The ship’s officers met in their great cabin, decorated with pictures and statues of the glorious past, and muttered in low tones.

“The new owner’s a strange one,” said the Navigator. “Won’t say where we’re going, only that it will be great when we get there. He’s pointed me in three different directions already today.”

“I know what he’s up to,” offered the Purser. “He’s got his eye on our cashbox.”

“That’s the ship’s, not his,” objected the Quibbler.

“And he’s the ship’s owner.” The Surgeon was habitually blunt, a pragmatic man.

“You’re so politically correct,” Quibbler replied. “But it’s there to meet payroll, our payroll, buy supplies, pay taxes, lots of things other than keep him in luxury.”

“Grand, but not thought out. Look at his latest one, cutting the rations of the rowers. To zero.”

“Quibbler, what’s wrong with that? If they worked harder they’d get fed. He’s giving them back that choice, work or starve. It’s a free ship.”

“Surgeon, how would you react to that choice for yourself?”

“Don’t matter, I’m not a rower. If they were smarter they wouldn’t be either.”

“They weren’t, until we captured them.”

“Well, that’s past history, water under the keel. Less food for them, more for us. We’re middle class, we deserve better.”

“What about the shift bosses?”

“They’re … blue collar, not quite like us. If they used their whips and metronomes better, we’d get to where we’re going sooner, and then the rowers could rest a bit.”

The Navigator rejoined the discussion. “Yes, the benefits dribble down to everybody. More food for us, we reach port sooner, they’re not hungry for so long. Makes sense.”

The Quibbler snorted. “Not much more for us, just a few crumbs. The real money and the good food goes to the owner’s suite.”

A bell rang. “Quibbler to the owner’s suite, jump sharp!” said a familiar voice. Quibbler leapt to his feet, saluted, ran to the stairway. In the owner’s suite the owner looked at him with contempt. “Quibbler, you’ve been at it again, you malcontent. You’re no use to me as a clown. From now on you’ll earn your keep as a stand-up comic for the ship’s crew.”